Noah was lucky to receive a TON of mail from us and the rest of our family while he was at camp. He was eager to share it with us, and so as we helped him unpack I paused to read each one. A cute card in particular (from a very close family member) caught my eye and I read the short message of encouragement once...twice...a third time. I couldn't believe what I was reading, as my eyes repeatedly ran across the scrawl. Amid the uplifting message, one phrase had my maternal instinct rising up in a fireball of fury.

Quoting from card: "It must be nice to know you're not the only one with this problem."

This very close family member has been consistently lacking in any desire to learn more about Type 1 from the start, (no matter how many times we explain to her that Noah is on no dietary restrictions, she always plays Food Cop with us) so I shouldn't be all that surprised or expect anything more than ignorance on her part, but this message was written to Noah from someone he's supposed to trust. He's 11. He has Type 1 diabetes, and will continue to have Type 1 Diabetes always. He knows this. He doesn't need negativity and to be told what he's got is a problem. 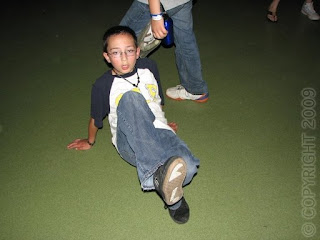 Noah busting a move at Dance Night
On Friday, I hopped in the car with Jon and my mom to fetch Noah from his 2 week stint at Camp Joslin. During his time away, we received just one letter written on his third day, stating that he didn't think camp was for him, and that he was very homesick. Oh boy. I tried not to overreact upon reading that, but every day of camp that went by, I anticipated a phone call from Joslin, and was releived at the end of the day when no such call came.
It didn't help that we missed him like crazy, too!

When we arrived at camp, we wandered from the dining hall to the cabin, looking for Noah. He wasn't sitting there looking all forlorn, waiting with his luggage, like I had imagined. We had to have him paged over the loudspeaker, and as he rounded the corner of the main office I could see the sheer happiness on his face and I knew the two weeks had become a turning point for him and his life as a kid with type 1.

There were hugs, we met a couple of his new friends, and heard a ton of stories
- he even lifted his shirt to show us the new site for his infusion set - something I could never get him to do at home. Through it all, I noticed a new confidence in Noah that had not been there before. He loved camp, and has already started talking about next summer.

Now that we're home and the normalcy has returned to our routine, that happy confidence is still abundant in Noah. So much so, that when it came time to do his site change, he surprised me by taking the reigns and doing it all himself. Drawing up the insulin, tapping out the bubbles, loading the pump, and doing the insertion like a pro.

I'll never be able to put into words the gratitude I feel towards the amazing doctors, nurses, staff and councilors at Camp Joslin. Just like Noah, I can't wait till next summer.

Noah is now a camper. Diabetes camp, to be specific. Being his first time, we had no idea what to expect, but it's been the talk at the dinner table here at our house for months now. Wondering what the cabins will be like, and where all the other kids will be from? Will the food be good? What about the weather? Oh, the weather. The darn rain that has been plaguing us here in New England for the better part of a month straight put all the other worries to shame. Well, all the crossing of fingers must have paid off, because Sunday when we drove down to the camp, it was a gloriously sunny, warm, and DRY day.

We ambled up to the office where we could see counselors and kids milling around...some with pumps and tubing precariously hanging out in the breeze...some not. I looked at Noah, and saw his smile of understanding and recognition. Even as we went through the check in process, and he got to know his cabin mates, you could the bonds of familiarity forming.

After saying good-bye about 100 times, and taking the long drive home, my husband and I sat in our too quiet house wondering if Noah was doing ok. We recapped the day, and talked about our observations. My husband put it perfectly when he said this to me:

"Seeing Noah today at camp, reminded me of that Blind Melon video. Remember the one with the little bee girl? She danced and got laughed at...went all over the place trying to find where she fit in. Finally she found other bees doing their dance, and she was so happy. That's kind of like Noah today at camp."

Noah has found his bees.