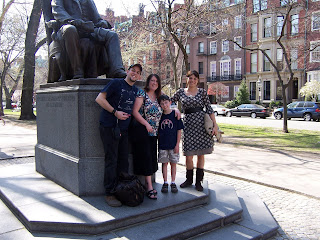 Yesterday, my husband Jon, myself and Noah, had a chance to meet up with Manny and his wife, Andreina (the founders of TuDiabetes and the Diabetes Hands Foundation) And Bernard, a fellow Type 1 blogger.

We met Manny and Andreina at their hotel, and after introductions, it was a non-stop flurry of excited conversation about anything and everything. It felt like talking with old friends that we'd known for years.

We decided to go see the Public Gardens (Swan Boats!) and on our way, we saw this: 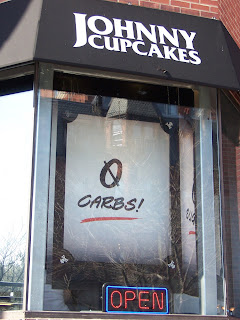 Zero carb cupcakes?? They will either be a miracle or taste nasty. Off we went across the street to check it out.
I paused to take that picture while everyone else headed into the shop. In a split second, they came filing back out, laughing. " T-SHIRTS"!, they said. Well, that's one way to offer a zero carb, zero fat cupcake- omit cupcake and replace with t-shirt.

When we got to the gardens, and it was beautiful- everything was starting to bloom, and we took a ride on the Swan Boats, where Noah recorded his very first video interview with Manny. Noah thought it was super cool to be interviewed, and was happy to be on camera. 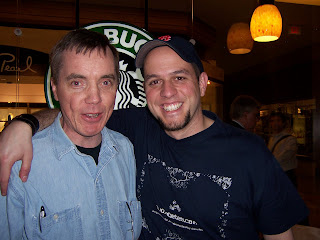 Bernard found his was to us in the park, and it was so cool to see the bond that he and Manny have. I introduced him to Noah as "the gadget man" - he showed Noah his CGMs (yes, 2 of them!) and how they worked. He really knows his stuff, and we plan to see him again at one of the pumpers meetings in MA sometime soon.
We all continued to walk and fall back into that easy conversation, and it hit me that here we were- this group of people plucked from different places geographically, but with a common bond that makes us instantly understand each other through Type 1. A mixed blessing, but a blessing nonetheless.
We stopped for a quick coffee and had to say goodbye to Manny and Andreina - I think we made them late for a meeting. (sorry guys!) We got a chance to chat a bit longer with Bernard about family, life and diabetes. 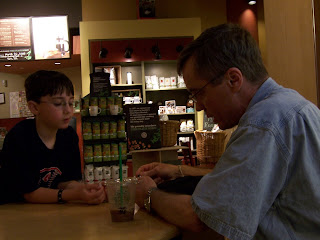 I am proud and happy to have met the most warm, friendly, smart, and caring people yesterday-we made some incredible new friendships, and Noah was given a chance to learn from people who don't just live with diabetes, but thrive with it. 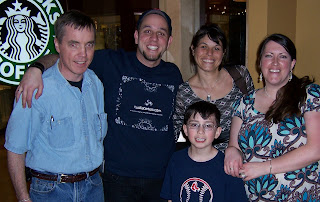 Oh I wish I could have joined you guys! I live right across the river!

Ugh most of the cool kids with Diabetes are too far north for me! It looks like you had a good time.

Lea it was the most fun. Thanks for all the great pictures.

Jillian I'm starting to look at places near Boston for a Saturday afternoon get-together in June or July. I'll post about this as soon as I can.

Did you see Hallmark Heroes on the 25th or 28th? Your picture of Manny and me appeared briefly (and shocked some of my relatives). It was a fun program. Let me know if you want me to make a copy of the video for you.

I hope we get to meetup a few times this year. God bless